People trained in NLP have increased awareness to detect patterns in other peoples’ non verbal communication. For example two different people could say the same words, yet those words have different meanings based on the delivery of those words. See below

- “I am really confident”

- “I am really confident”

- Weak tone, reduced volume, higher pitch at the end of the sentence

In example one, the tonal and physiological elements that accompany the words indicate a match and that all three channels are in agreement. In NLP it known as congruency when all parts of the system correspond.  In NLP we do not assign absolute meanings on individual units of body language.

People unconsciously nod or shake their heads which is an obvious give away whether a person is agreeing or disagreeing with themselves. Palms down is often (not exclusively ) related to a command.

In example two the tonal and physiological elements do not correspond with the words that are being said. The message is incongruent. In the UK, when the pitch increases at the end of sentence it usually denotes a question and when the pitch lowers it usually denotes a command. The phrase in example two is said in a questioning tone, which, with reduced volume, indicates a degree of doubt.

You may have heard the old saying, ‘it’s not what you say, it’s how you say it’ This saying fits with how we think in NLP. For example, how many ways can the statement “I really like you” be conveyed? If you think of all the different types of tonality and physiology that can accompany the statement, you will soon realise the non verbal elements carry much more of the weight than the words.

Albert Mehrabian, a Professor of Psychology at the University of California,  established the following percentiles based on his research into communication for liking or disliking another person. 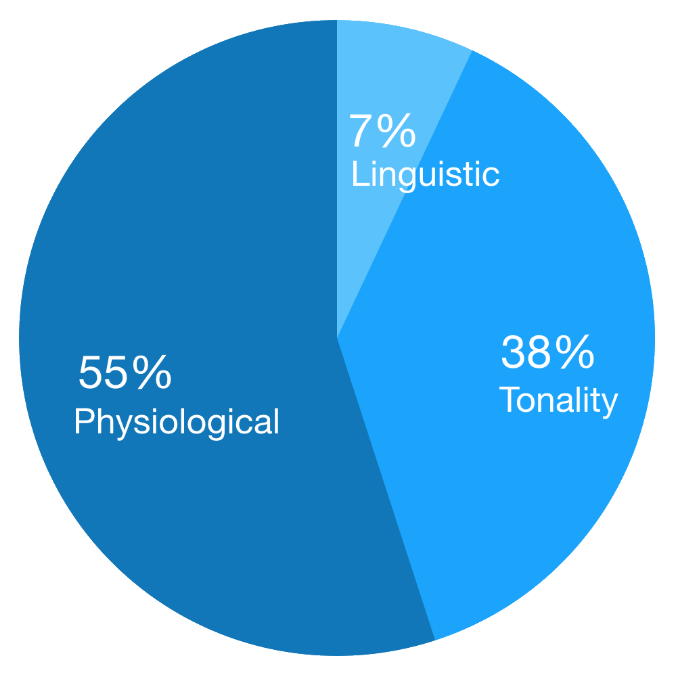 It is important to hold in mind that Mehrabian’s research was conducted in a very specific context. Having said that, the non verbal elements of all communication (tonality and physiological) seem to carry more weight than the words do, particularly where the context is emotional. In the context where the content is intellectual e.g. a lecture the tonality and physiology add weight to (or subtract from) the message.

Face to face communication is a continual loop of both verbal and non verbal messages between two people. People trained in NLP communication skills ensure that when they communicate, all three channels are congruent i.e. their words are supported by appropriate tonal qualities and body language. This means the listener is more likely to respond. In turn the NLP trained person continually listens and observes the people who (s)he is communicating with. 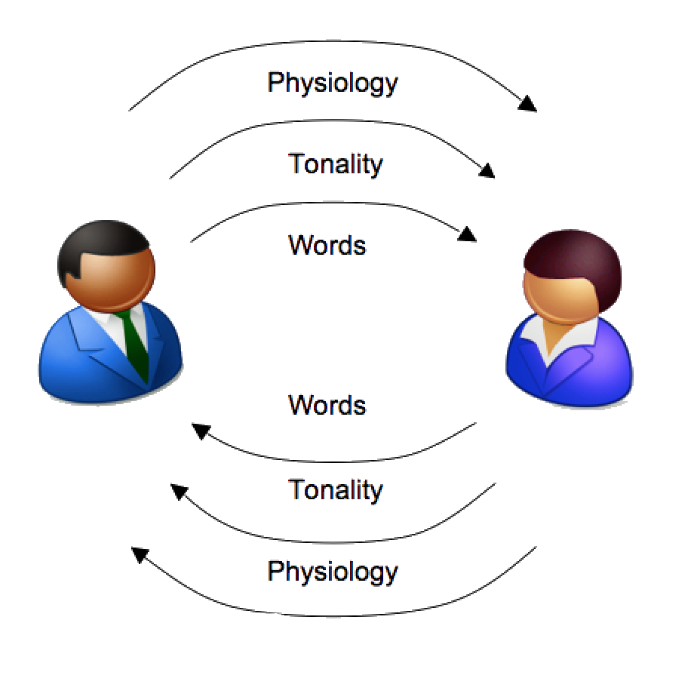 Whenever an internal representation shifts something will also shift in a person’s external behaviour. On our NLP courses, participants learn to develop their own sensory awareness by detecting the subtle movements in another person’s physiology and voice tone. In NLP this is known as calibration which means detecting differences.

The larger movements are easy to detect. It’s the finer shifts that require a high level of awareness. If you are naturally good at reading people i.e. knowing when they are lying, hiding emotions etc. you have probably developed the skill of calibration unconsciously. Some people have their attention orientated internally which is fine for self awareness, however to detect change in others it is important to also have your attention oriented externally.

The things you see in another person’s physiology

Things you hear in another person’s verbal expression

You may think that the subtle changes in skin colour, pupil dilation, breathing, arm and leg movement etc a lot to see. If you are new to this fine level of observation you would be justified in thinking it’s a big leap, however it does get easier with practice. There is an NLP process for expanding your awareness. You do this by expanding your peripheral vision while staying focussed on the central object.

The process below is simple format to help you expand your visual awareness.  Practice the format until you can easily access a wider scope of vision and you will discover that observing the small changes in peoples physiology easier to detect.

1. Sit comfortably and focus on spot on the wall ahead of you

3. Expand your awareness so you are aware of half a metre either side of the area of focus, while still focussed on the spot

4. Expand your awareness so you are aware of one metre either side of the spot, but still focussed on the spot of focus

5. Now expand your awareness to two metres, while focussed on the spot

The above will give you a heightened expanded awareness in the visual field. Most people find that the process brings about a relaxed alertness.
After you have done the process take a look around and see how much more information you can see. If you have a person you can work, explore the visual awareness exercise below:

Person A does not speak or tell person B whether they’re accessing the positive or negative experience. Person A refers to the first experience as 1 and the second experience as 2.

4. Person A randomly recalls one experience at a time.  Person B is to state whether person A is in experience 1 or experience 2 purely through observing which sets of physiological distinctions are present in the moment.

If you run the above exercise with a few people you will soon realise that some people are more explicit than others. You will also find that each person has their own set of physiological distinctions for different experiences and emotions. In NLP we don’t assign a universal language on body movements.

Each person has their own unique body language with different types of experiences and emotions.  In NLP we calibrate people as they access different experiences.  By doing this you will recognise each individual’s characteristics for the various states they access and accurately be able to read their non verbal signals.

In this article I have presented how NLP we pay attention to all elements within a communication system, the words, the physiology and tonality, and based on Mehrabian’s research, 93|% of communication is interpreted on the non verbal elements. I have presented the composite units to pay attention to in the speaker’s tonality and physiology, and how by using peripheral vision, you can see and hear more.